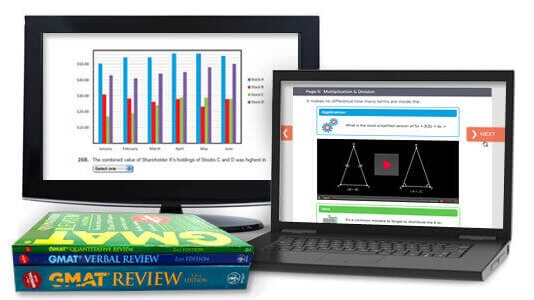 Our Expertise, Your Schedule

The total score is a scaled combination of the verbal and quantitative scaled scores and thus reflects a student’s overall performance on these sections. The AWA and the Integrated Reasoning sections are scored independently; scores for these sections do not affect the 200-800 scaled score.

The Verbal and Quantitative Sections

To compute the scaled score for the Verbal and Quantitative sections, GMAT uses an algorithm that takes the following factors into account:

At the beginning of each section, the GMAT presents a question in the middle range of difficulty. If the question is answered correctly, the next question will be harder and the test-taker’s score will adjust upwards. If the question is answered incorrectly, the next question will be easier, and the test-taker’s score will adjust downwards. (The test taker does not see this adjustment because the score is not revealed until the entire test has been completed.) Thus, the algorithm is constantly recalculating the scaled score as the student progresses through the section. As a test‑taker answers more questions, the algorithm receives more information about his or her skills and is able to calculate an accurate score with greater and greater precision.

The following table shows the 61 possible GMAT total scaled scores and the percentile rankings assigned to each.

While total scaled scores range from 200 to 800, approximately half of all test takers score between 400 and 600.

The AWA essay receives two scores on a scale of 0 to 6, at least one of which comes from a human reader. The other score, however, may come from a computerized evaluation program. If the scores from the two readers are identical or differ by exactly one point, they are averaged to obtain the final score for that essay. If the scores differ by more than one point, an expert human reader determines the final score.

The following table lists all of the possible AWA scaled scores and the percentile rankings assigned to each of them.

Over 90% of test-takers receive a scaled score of 3 or higher on the AWA. Since human readers are involved in the AWA grading process, students cannot view their AWA scores on the same day that they take the test. Students who accept their scores receive an official GMAT score report approximately two weeks later that includes their AWA score.